The Guy Who Walks The Moors 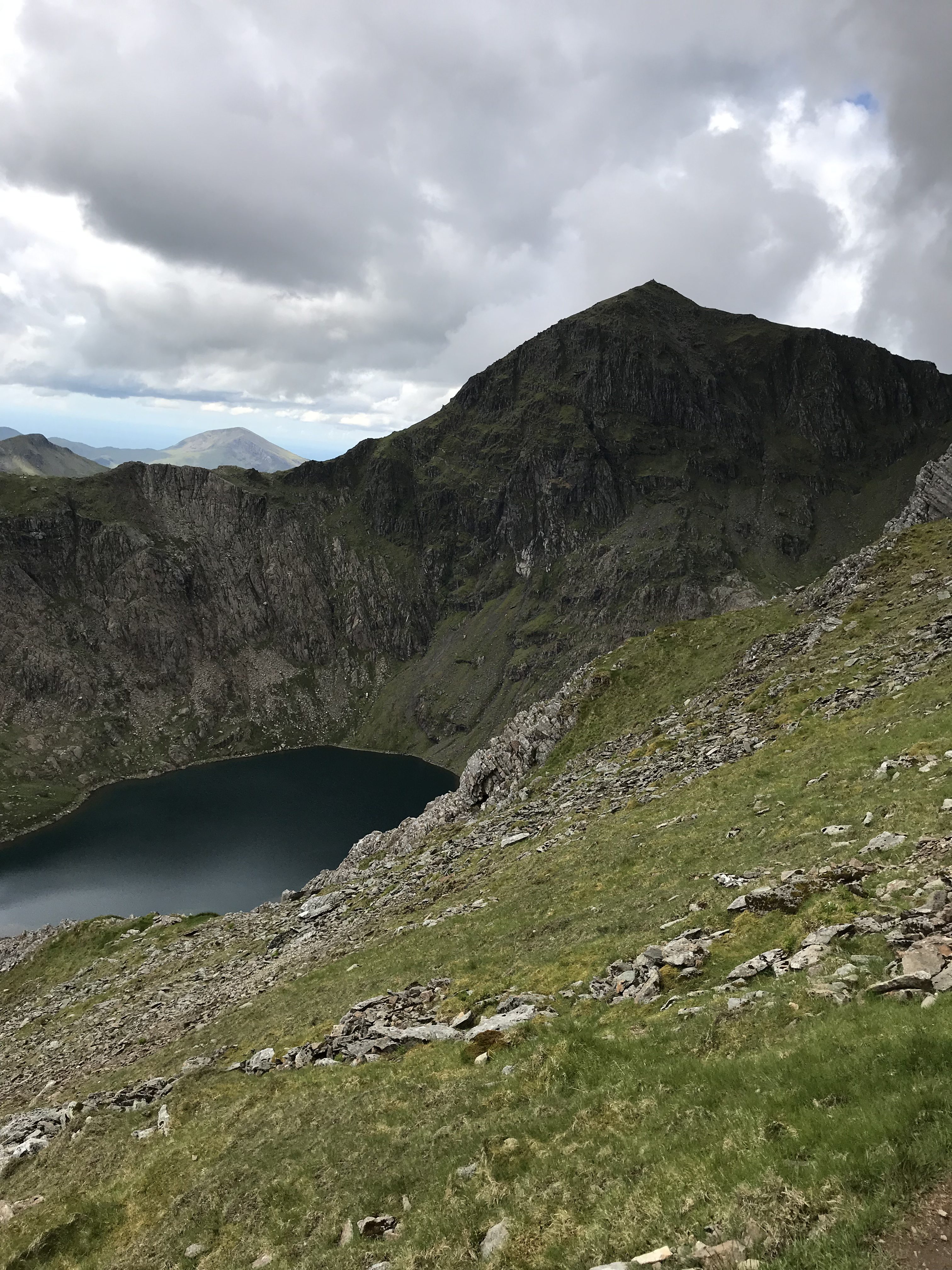 I’ve wanted to walk the Snowdon Horseshoe for many years. It’s a collection of ridges linking the four high summits, including Snowdon (Yr Wyddfa), which encircle Glaslyn and Llyn Llydaw, and is probably the best ridge walk in England and Wales. As such, it’s been written about extensively (and often rather breathlessly), with its exposure and dangerous record being frequently mentioned. Despite the hype, it’s a serious walk – with a well-deserved scrambling grade 1 – and very airy to boot, with few ways of escape once the more serious sections have been started. Only about seven miles, but almost all of that is rugged mountain walking

I chose to do it on a recent trip; the previously excellent weather forecast had, predictably, changed significantly, with rain forecast for the afternoon – but I would be past the most serious scrambling by then, so chose to go anyway. The weather was certainly perfect as I drove up past the Pen y Gwryd hotel and my luck was in as I got the last parking space available at Pen y Pass; the car park and visitor centre here are plastered with posters warning inexperienced walkers of the dangers of Crib Goch, the first section of the horseshoe. I ignored them and set off.

Thankfully, the young nephew was working for the remainder of my visit, so I was walking alone. Still, my legs felt heavy from the previous afternoon’s rapid ascent of Tryfan with him, and I eased myself into the steady uphill of the Pyg track at a slower pace than the previous day. This section follows a well-made track for 40 minutes or so to Bwlch y Moch, where the Crib Goch path branches off right. This is rougher and steeper, passing over rock steps covered in crampon scratches, until the first real scrambling is reached.

I’d been pretty alone until this point and so was dismayed to find a disparate group of 10-12 people at the base of the first rock step. Stories of busy-ness and traffic jams on the main ridge are about as common as those about its danger, and it appeared that I was likely to be at the back of a long, slow queue up the east ridge and across the central, red ridge. While I’d half expected this, it was still a disappointment.

However, there was a great deal of faffing going on, with some people changing their minds, giving up and setting off back down the mountainside, and others dithering about where precisely to tackle the first steep section. So I strapped my poles to my sack and took advantage of this, by nipping up a slightly steeper section to the right and outflanking the majority of them, before emerging on the upper ridge. This is a steep, airy series of rock steps with great views down the Llanberis Pass to the north and of the lakes at the base of the horseshoe to the south. If you’re confident on rocky ground, you can walk briskly up this, and I did – passing a German couple – until I reached the exposed summit of Crib Goch itself (3028 ft), leaving the others well behind.

From here, the rest of the walk becomes clear: the knife edge central ridge of Crib Goch, and the continuation Crib y Ddysgl leading to the next summit, Garnedd Ugain (3494 ft); on up to the pyramid of Snowdon at 3560 ft, already covered with the silhouettes of many, many people; then a drop down to the south, before the rocky rise to the final summit of the day, Y Lliwedd (2946 ft), perched above the highest cliffs in Wales. All of this was exhilarating and dramatic, but the best part of the view was straight ahead; somehow, astonishingly on a sunny Summer’s day, there was no-one in sight for the full length of the ridge. I would have it to myself and it would be all the better for that. 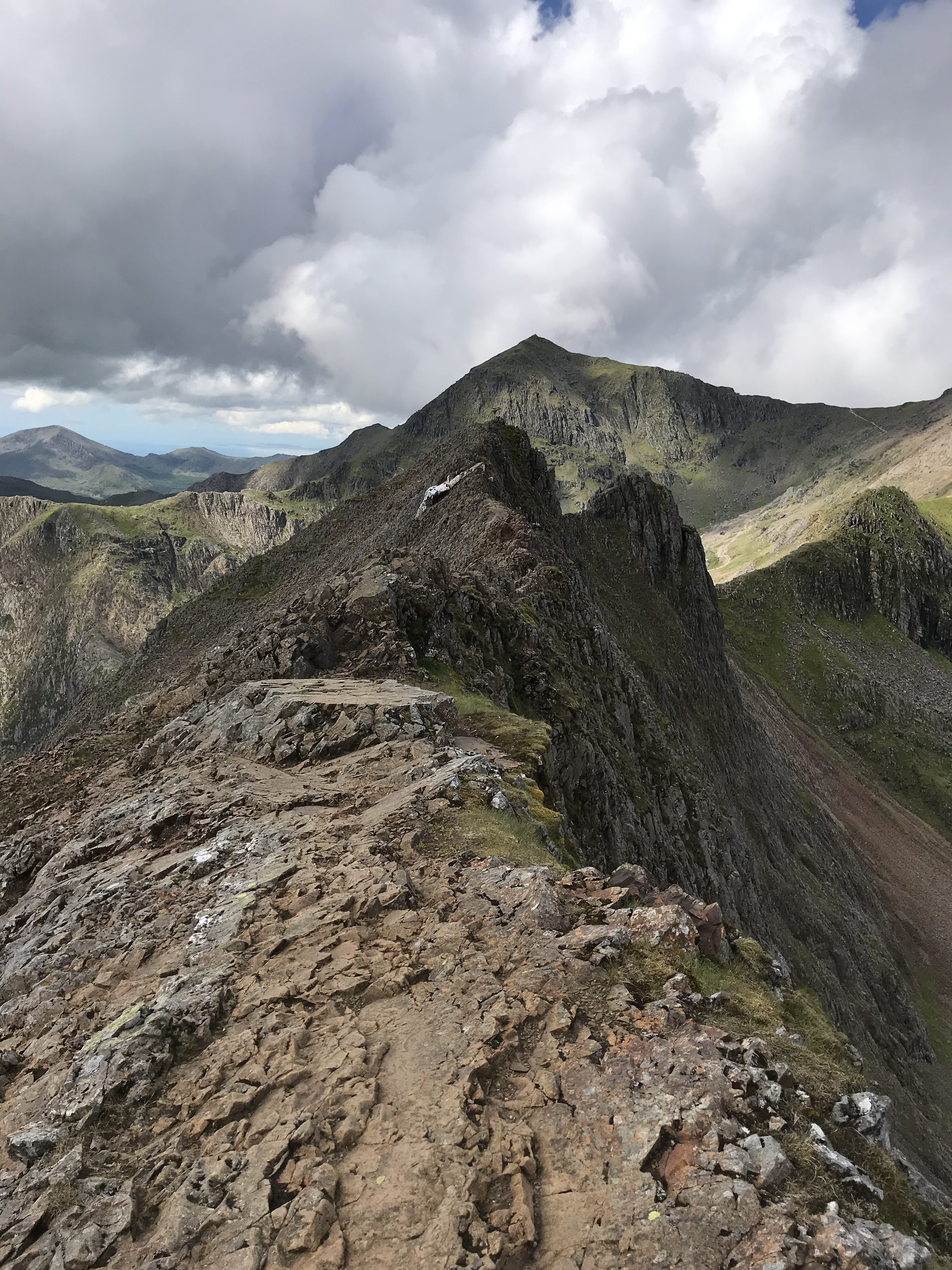 So I pushed on. It’s easy scrambling; I was able to walk along the very crest much of the time – it narrows to two feet wide in places – with occasional moves on the South side of the ridge. Although it’s easy, it’s also precipitous, with very steep drops on both sides, particularly the north, so a trip or stumble would mean a very serious, probably fatal, fall. So, as one whose anxiety can manifest itself in dizziness and shakiness, I took it steady, concentrated hard, and loved every minute of this section. It finished with three rocky pinnacles, which I tackled head-on, before dropping roughly down to Bwlch Coch – a small grassy patch before the next difficulties. With care, a descent can be made either north or south from here, but that was not in my plan. The clouds, which had been blowing in as I came across the final stretch of ridge darkened, visibility dropped significantly, and spatters of rain and hail were blowing in the wind. So on with a jacket, quickly munch a cheese and pickle sandwich, and on, before cold set in.

The ridge of Crib y Ddysgl is longer, and a little easier than what has gone before, although still massively exposed, and I was able to move quickly up the crest and northern side, meeting a couple descending – the first people I had seen since leaving the summit of Crib Goch – to reach the trig point at the top of Garnedd Ugain. Visibility was very poor now and, very aware of the huge drop hidden a few feet to my left, I followed a line of cairns, each looming into view as the previous one faded away. Fortunately this is a short, easy section, and I was further guided by the sound of a tourist train grinding up the line in front of me.

It passed greyly in front of me as I reached the tourist track and turned south and up towards the summit of Snowdon. What a contrast; literally hundreds of people stomping wetly up or down through the cloud, some astonishingly under-dressed for the conditions. I pushed on quickly, eager for this section to be over and reached the summit, where crowds of people were emerging from the station and café and jostling for position on the very top a few feet higher.

I didn’t pause. I’d been to the summit previously (on a day of very similar weather) and there would be no view to justify the crowds, so I walked rapidly past, heading south west down the Watkin path, before emerging almost immediately (and with enormous satisfaction) into bright sunshine as the cloud cleared. I sat at the junction of the south ridge and the Watkin path, ate my lunch and looked at enormous views across Moel Siabod and beyond; further to the east across endless hills and mountains and wide stretches of sand by the sea. I was only disturbed by occasional people appearing breathlessly from the steepness to the south below.

So onwards, already starting to feel the effects of the previous day and the first half of the horseshoe in my legs. The initial section of path has been crafted by the National Park into a series of comfortable stone steps so, although very steep, it passed easily. All too soon this ended, and the path degenerated into a mess of scree, shale and wet rock steps, all horribly stranded by the many of us who pass this way. Two workmen – volunteers or National Park staff – were unloading more boulders from a long line of full dumpy bags flown in by helicopter. The work looked brutally hard – but what a commute to work each day, and what a place to work.

I pushed on, with the path gradually levelling out and becoming easier before reaching Bwlch Ciliau, where the Watkin path dropped off to the south and west. But I went straight ahead, on towards the summit of Y Lliwedd – ignoring the loose, stony track and taking instead the rough, easy scrambling on the very edge of the cliff to the left. I’d met a few people on the drop down from the summit of Snowdon but was alone again now in the afternoon sun. The hype surrounding the horseshoe is largely around the Crib Goch ridge, but this final scramble and summit were probably my favourite parts of the day; warm, solo scrambling, with a view back across to the ridges of the morning.

On over the twin summits, over Lliwedd Bach and then the ridges are done. There’s a rough, steep descent to the banks of Llyn Llydaw, with plenty of opportunities to pause and look back into the cirque, where clouds were darkening again, and to trace the route taken over the last hours. Finally, the metalled and largely level Miners’ track leads quickly back to the car, and the end of a glorious day out.

The Snowdon horseshoe been much written about, as I said, but that’s because it is such an astonishingly good day out for experienced walkers. Not to be underestimated, with just the right amount of challenge; to be able to walk this in the sun, alone on all the major sections, was as unexpected as it was enjoyable. 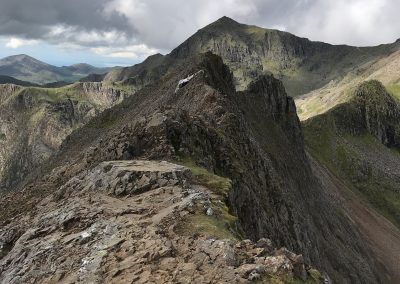 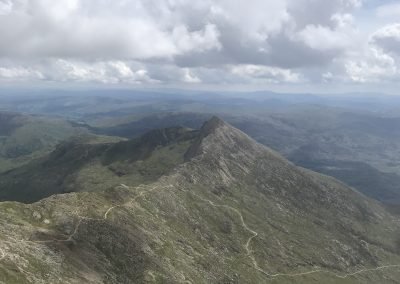 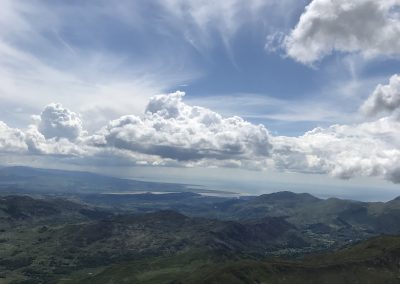 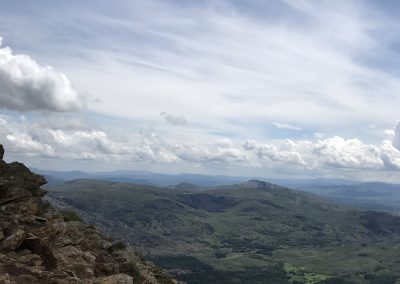 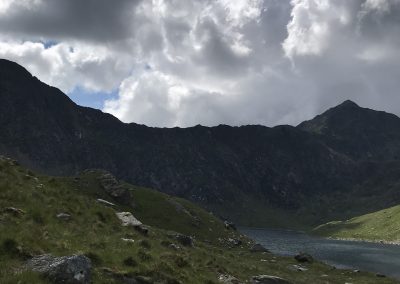